From the Executive Summary

Stats On Backing Up 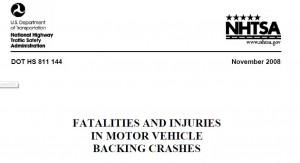 A backover is a crash which occurs when a driver reverses into and injures or kills a nonoccupant such as a pedestrian or a bicyclist. Backovers can occur either on a public roadway or not on a public roadway, i.e., in a driveway or in a parking lot. The former are called traffic backovers and the latter nontraffic backovers. There are also “other backing crashes” that are not backovers, i.e., they do not involve a pedestrian or other nonoccupant, that occur when, for example, a driver backs into a tree or pole or when a driver backs out of a driveway or parking space and is struck by another vehicle. Together, backover crashes and other backing crashes are referred to as backing crashes.