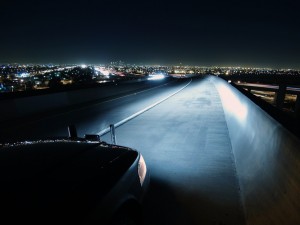 Although most drivers realize that the higher the car’s speed, the more distance required to stop. What is surprising to many drivers is how much additional distance it takes to stop a vehicle with just a small increase in speed. The fact is that if you double your speed you increase your stopping distance by a factor of four.

The numbers listed above are not affected by the method of braking used. It makes no difference if a driver brakes with their left foot – threshold brakes – or uses a parachute to stop. If the speed is doubled the stopping distance increases by a factor of four. Bottom line you cannot arbitrarily increase your speed, it’s literally deadly.

As a side note – DO NOT THRESHOLD BRAKE WITH AN ABS VEHICLE. With a vehicle equipped with ABS, press as hard as your foot can press and let the computer do its job.

A major component of braking to avoid an emergency has nothing to do with braking, its all about where you look while the emergency is unfolding. Car manufacturers have been studying this phenomenon for a while. Simply stated – your hands go where your eyes look. As soon as the emergency presents itself look for a place to put the vehicle. Look where you want the vehicle go and your hands will follow your eyes. Many times the driver’s eyes fixate on the object they are trying to avoid, and the result is they drive into it.

EVOC instructors, this is a take away that you want all students to leave with your course. A good place to make the point is the accident avoidance – lane change etc. exercises. As soon as the command is given to go into a lane the student needs to look where they want the car to go.