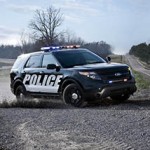 A while back we conducted a Vehicle Dynamics Training Program for a Law Enforcement Agency in Massachusetts. One of the training vehicles was a Ford Police Interceptor Utility Vehicle – SUV. Not that I am a skeptic BUT I never thought you would ever use the words Police Packed SUV and pursuit in the same sentence. But after working with and testing this vehicle we have to change our thought pattern.

Back to the Ford Police Interceptor Utility vehicle – While driving the SUV through the Skid Pad the G Meters produced impressive handling numbers. If you did not know what type of vehicle the numbers represented, you would assume it was a non-SUV police packaged vehicle. The SUV produced an impressive .9 G’s on the Skid Pad.

In our opinion, Skid Pad numbers are ok – but the proof of emergency maneuvering capability comes by measuring the vehicles performance while driving through the lane change exercise. This type of an exercise supplies the driver and the vehicle with a limited amount of time and distance to get out of trouble. The Ford Utility Vehicle produced impressive numbers. The vehicle went from a peak of .9 G’s moving to the left and in approximately .4 seconds produced .85 G’s moving to the right.

When time permits, we will put together a white paper on the vehicle response data we produced from the training program.

As a side note – From our days working with Mercedes on their armored vehicle program, we understand the concept of a purpose built vehicle, and in my opinion that is what the Ford Utility Vehicle is – a purpose built vehicle for the intended mission. When that oh stuff moment comes – this is the vehicle you would want to be in.

We have not driven other police -packaged SUV’s, so this is not meant as a comparison – or as a criticism of the other vehicles.