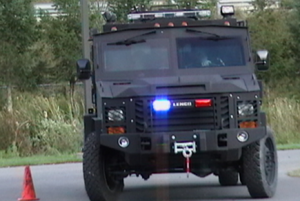 During the coverage of the terrorist attack in San Bernardino, the National and International media flooded the airways with videos of tactical vehicles doing what they are designed to do – drive INTO the kill zone. This is a scenario that the security community may find unusual. Our job is to stay out of the Kill Zone, theirs is to drive into the Kill Zone- on purpose, which statistics indicate they have been doing often, in fact the statistics are staggering – There Have Been More Mass Shootings Than Days This Year

Most of the negativity comes from how the talking heads portray the role of the tactical vehicle. During the San Bernardino attack, they compare the BearCat to the MRAP, constantly calling the BearCat a “Combat Vehicle”. Two different vehicles with different missions. The opposite, and in my opinion, the more accurate view was expressed in a Denver Post editorial following the Colorado Springs incident, an excerpt from the editorial

“In the Colorado Springs attack, the lone gunman might have killed more than three people if the police had not had an armored personnel carrier known as a BearCat at their disposal. According to various reports, the BearCat was used multiple times to ferry people trapped inside the facility to ambulances and police vehicles outside”.

This scenario is a classic example of a group whose mission does not fit into a standard training program, the officers who drive into the kill zone need a specific set of driving skills that are dictated by their mission. An old article written six years back