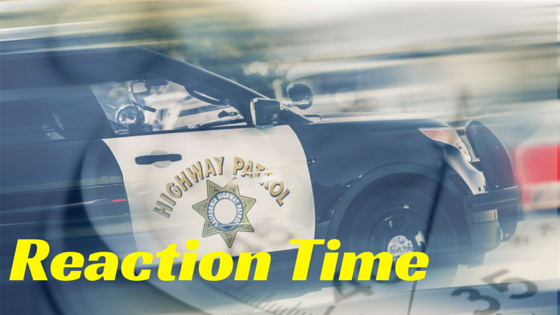 While driving if confronted with an emergency scenario, the driver’s reaction time can be the difference between success and failure. Although it is an important part of driving and driver training, reaction time is not easy to demonstrate. But there are exercises that can show the effect of reaction time on the decision-making process.

There are many factors that can affect the driver’s reaction time, but before we talk about them, let’s find out just what reaction time is.

Reaction time is the sum of the time needed for:

The brain to receive information from the senses. The senses we’re referring to also include sensations of motion and related “seat of the pants” sensations.

Making decisions on what to do next. Many times, this is a reflexive reaction that carries a potential for danger with it, such as immediately smashing down on the brake pedal when we feel the car begin to skid.

Transmission of the messages from the brain to the muscles needed to react and move the controls.

The muscles to respond.

Step 3 is important, but there is not much that can be done in an EVOC program to improve that portion of reaction time.

The most-critical portion of the reaction process is Step #2. After the senses detect the danger, a decision has to be made about what to do with the received information. The time proven example of the interaction between steps 2 and 3 are young drivers. They have very fast reflexes, Step 3, but it is preceded by the wrong decision Step 2. They can react faster (Step 2) but unfortunately, they make the wrong decision, and they do it quickly.

The best research done on the effects of surprise on reaction time is by Dr. Marc Green. He has been studying the concept of reaction time for over 34 years. If you are running an EVOC program I would strongly suggest you read his work – just Google his name, and you will get many articles written by the Doctor. In one of his articles, he discusses the difference between reaction time when the event is expected, (which could relate to an experienced driver) and when the event is a surprise (that could relate to an inexperienced driver).

As an example, when the driver knows they have to brake they can achieve the best possible reaction time. Dr. Green says that the best estimate is 0.7 seconds. Of this, 0.5 is perception, and 0.2 is movement, the time required to release the accelerator and to depress the brake pedal.

When the need to brake is a complete surprise reaction time is substantially different. In this case, Dr. Green suggests that the best estimate is 1.5 seconds for something that may be coming at you from the side and a few tenths of a second faster for straight-ahead obstacles. Surprise creates a perception time of 1.2 seconds and a movement time of 0.3 seconds.

As many of the articles in the past have mentioned, an emergency is a time-distance relationship. How much time does the drive have and how much distance does the driver have. If the decision-making process eats up a big chunk of time nothing good is going to happen.

As an example – If the driver is moving at 40 MPH (58.8 Ft/Sec) and is driving into exercises where they expect to use the brake, the distance used up in reacting to the exercises would be .7 times 58.8 feet or 41.3 feet.

This is a learning point that does not add time to your training program yet can be an invaluable tool.

An exercise you find in most all EVOC programs is the Slalom course. Cones separated by a known distance and the student drives through them at a speed the instructor determines.

I’ll use the dimension of the slalom course we use in our training program which is cones separated by 60 Feet. Students start out an around 30 MPH; speed is monitored by a radar gun. 30 MPH is approximately 44.1 Feet per Seconds; the cones are 60 Feet apart if you divide 60 by 44.1 you will find that it takes 1.36 seconds to drive from cone to cone That would be 1.36 seconds for the student to make all the decisions they need to make, so they don’t hit the next cone. Raise the speed to 35, which is 51.45 Feet per Second follow the same math divide 60 by 51.45 and the student now has 1.16 seconds of decision time between cones.

An increase in 5 MPH and a decrease in time to react (reaction time) of .2 seconds, ask your student the difference that .2 seconds less time to react makes, I’m sure the answer will be allot. At 40 MPH that would be 58.8 feet per second same math would give you 1.02 seconds in between each cone. At 40 MPH with cones at 60 Feet, it would be extremely difficult, if not impossible. The difference between it being easy and be being near impossible is .3 seconds. If you’re going to do this it has to be done using a radar gun; you cannot accurately measure speeds by sitting in the passenger seat looking at the speedometer.

A little as .2 seconds more time to react makes the difference between success and failure. By the way, what is.2 seconds, .2 seconds is the time it takes to blink your eye. In the blink of an eye, you can change failure into success.