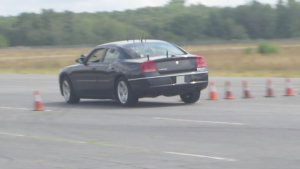 Handling and Cornering are often used to describe the same vehicle/driver characteristics, but they are two separate issues.

Cornering is the amount of centrifugal force the car can generate measured in g’s, and expressed as Lateral Acceleration.

Cornering is a measurement of the force exerted on the vehicle’s center of gravity. That force is called Lateral Acceleration and is measured in G’s. The higher the G’s, the more force the vehicle can absorb, which in turn means there is more cornering power available to the driver.

When testing vehicles, most car magazines measure cornering capability by driving a vehicle around a skid pad, which is a circle with a known radius. The driver will increase the vehicle’s speed until they cannot keep the vehicle centered on the radius. To ensure accurate results the magazines instrument the vehicles with computers that measure Lateral Acceleration/Cornering Power.

As an example of cornering power; in a Motor Trend article the Police Package Dodge Charger was measured to have .84G of Lateral Acceleration/Cornering Power (high for a sedan).

Handling can be qualified and quantified as how the car responds to the driver, handling expresses controllability.

Handling is defined as how the car responds to the driver, handling expresses controllability, and is the car and driver working together.

In a recent article that appeared in the publication Car and Driver, engineers from several of the car manufactures said this about the definition of handling. (In parenthesis are my thoughts/opinions)

The engineer’s are all saying the same thing – what happens to the vehicle’s output at or approaching the limit of its cornering power is what defines handling.