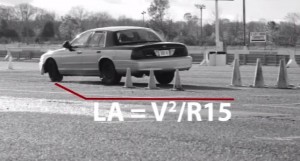 While in a training program, on patrol or driving to the shopping mall, all drivers are at the mercy of the environment around them and the vehicle they are driving.  Like Mother Nature, driving is a balance, and that balance is called the Driving System.  The Driving System is taken from an age-old concept called “The Safety Triangle”. The Safety Triangle is made up of three components:  THE MAN, THE MACHINE, and THE ENVIRONMENT. It was originally used around the beginning of the industrial revolution when people were first starting to interact with machines. The Safety Triangle was used as a tool to prevent industrial accidents – simply pointing out that when an accident occurs, it is caused by one of the components of the Safety Triangle failing. The automotive industry adopted the concept and called it the Driving System and used the concept to define accident causation. If there is a vehicle accident one of three things failed – The Man – which is the Driver, the Machine –which is the Vehicle or the Environment – weather, road conditions etc. Let’s look at how the Driving System works for EVOC.

In EVOC the machine is the training vehicle and it presents a unique problem. Although a new out of the showroom police packaged vehicle will rival most “Euro Sedans” in the area of performance, any vehicle that has been used up in an EVOC program will suffer some degradation in performance. Consider it a given.

Brakes – The difference between brakes that are in good condition and brakes that are in fair condition is a 78 % increase in stopping distance. The difference between brakes in good condition and in bad condition is as much 2.5 times the original stopping distance. This can show up in your training if you are training many students in a few vehicles. You cannot compare the students who were the first group to drive through the braking exercises with the students who were the last to drive through the exercises. At this point you are not measuring student capability you are measuring the vehicles decreasing braking capability. What is the solution? There is not much you can do if you are in the middle of a program. Let the brakes cool off – this is only a short-term fix – although it can be expensive after every program to replace the brake pads.

Tires – it is not as much as tire wear as it is tire pressure. There is an abundant of opinions on what tire pressure should be for training. Here is my opinion – If nothing else make sure tire pressures are all the same on all similar vehicles. No matter what vehicles you are using and especially if you are running SUV’s or trucks look at what the vehicle manufactures recommended tire pressure – and look at the side of the tire find the maximum tire pressure – unfortunately the numbers may be different. My opinion – use whatever is the highest. Why the highest? Keep in mind that the air in the tire determines the amount of weight you can put on the tire. In the high-stress exercises a student can have a substantial amount of weight on one tire – at that time the rim of the outside tire, with normal or slightly higher tire pressures, can be close to hitting the ground. If the rim hits the ground nothing good is going to happen.

Officers have to drive in conditions that most others would avoid. In some instances (ice, hard packed snow) the road conditions have deteriorated to the point that the vehicle part of the driver/machine has to be modified to meet the conditions of the environment. Things like tire chains and studded snow tires are mandatory. What if you have to conduct training in weather conditions that you don’t normally train in?  For conditions that create a wet surface, the major difference is the coefficient of friction of the surface. As an example, the difference between rain and dry asphalt can be as much as a 50% difference in the speeds that can be attained in any given exercise. A simple thing you can do is to get the accident reconstruction team out to the driving pad and have them determine the CF of the surface, both dry and wet – they can tell you how much you would have to lower the speeds. The CF of the surface is something that you should have tucked away in your lesson plan.

If you have the luxury of a skid pad you can conduct exercises for snow and ice conditions. But I would still recommend that you get the accident reconstruction people out to the skid pad and have them come up with the coefficient of friction numbers. Then there are the skid machines, the most popular I would imagine is the SkidCar System. Based on my personal experience working with the SkidCar (for a government agency), developing curriculum from everything from vans to 18 wheel trucks they are a useful tool for skid control. In my opinion, the SkidCar is underutilized in training, there are uses for it other than skid control.

The third leg of the driving system – the driver – is the part of the system that we train up to work with, and to compensate for the challenges that the Vehicle and the Environment may create. We (PDC) have written and will continue to write articles covering the driver,s interaction with the Vehicle and Environment in future posts.